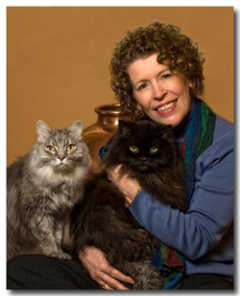 Louis and Ichabod came to us in Dubai

I am driven by a desire to express myself creatively. As a child, I aspired to paint masterpieces, sing for the masses, and compose epic novels. I just knew there was an artist within me and I NEEDED  to express myself. In 1980 I took a quilting class at the local fabric store because I wanted to make a bed cover. I realized then that I had found my creative outlet. 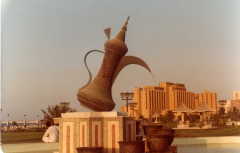 After I had been a traditional quilter for only two years, my husband was contracted to a two-year position with an American engineering firm in Abu Dhabi, United Arab Emirates. We moved to the Middle East in 1982 with our little daughter, my Viking sewing machine, a trunk full of fabric and a heart for adventure. As soon as it became known within my husband's company that I was a quilter, I was pressed by fellow expatriate women to teach them to quilt. Now, that's called "growing up fast"! And with limited supplies available in the local market! My husband's two-year contract expanded to nearly 18 years and during that time I saw the world, had a second child, taught numerous multi-national quilting classes, and was a founding member of guilds in Abu Dhabi and Dubai, where we moved in 1993. While in Dubai, I was fortunate to be mentored in drawing and watercolor painting by British artist, Judith Ford. Those lessons in color and composition continue to be very useful in my work with fabric. 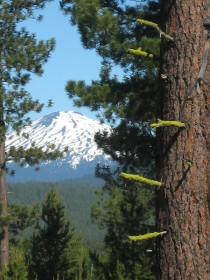 The view of Mt. Bachelor from our front window

We chose to move back to the United States in 1999 and my husband secured a position in Sunriver, Oregon. Since that time, I have been active in the 120-member Mountain Meadow Quilt Guild in Sunriver. I was honored when the guild named me Master Quilter (a life-time title) in 2002, and I served as their Co-Chair in 2006 and 2007. I continue to teach locally and around the State as well as taking classes in order to keep up on what's new.

In 2007 I was commissioned to design two pieces for the Lake House at Caldera Springs, a new resort community near Sunriver (see Molton Convergence and Viscous Cascade on the gallery page). I have enjoyed making more commissioned pieces since then and find it to be very rewarding. I enjoy being given a scenario or statement and interpreting it in fabric. 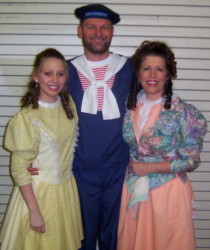 My younger daughter, Jessica, Steve, and me backstage of H.S. Pinafore.

While art quilting is my passion, I also enjoy performing classical music as a singer. I studied voice with the late Dr. Monica Torrey from 2001 to 2010 and performed with the Obsidian Opera Company during those years as a chorus member. I also performed in the roles of Pitti Sing in The Mikado and Grandmother Tzeitel in Fiddler on the Roof. My husband and I are charter members of the Central Oregon Mastersingers under the direction of Clyde Thompson and continue to enjoy performing with them. I have donated fundraising quilts to benefit the Youth Choir of Central Oregon, Dr. Monica Torrey, and the Obsidian Opera Company (see Tutti Fior on the gallery page). 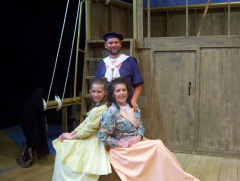 Below, daughters Jessica and Stephanie visit us on the set of Carmen. 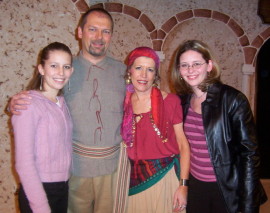 Do you want to know more about my work?